Everyone asks, what can you do with a Cosmoneer?

Well, at World Maker Faire 2017 the public will have a chance to operate a Cosmoneer and take the Spacecraft Docking Challenge, a “real world” space problem.  The scenario unfolds like this:

Your name is Captain James G. Quirk, and you have been on board the Intergalactic Space Station for 6 months now.  During a routine resupply mission, an unexpected solar flare erupted and has reached the station  just as  the resupply capsule was on approach.  Every effort has been made to accelerate the capsules arrival, but the timing couldn’t have been worse.

Critical systems in both the space station and the resupply capsule from Pace-X rocket systems were damaged by the  intensity of the flare, leaving you in the dark for hours and the capsule stranded at it’s last holding position just 30 meters from the station. To boot, it is just out of reach of the Canadarm2, which performs the final docking sequence for all arriving spacecraft.

You and the crew have been working around the clock for three days, sleeping and working in shifts  to repair what you can. Your efforts have paid off and the station is now starting to come back to life… but the Canadarm4 has been left with only of its seven articulating joints still operational!

One of your crewmates has cobbled together a solution Ground Control had been working on.  Someone decided to use a simulator that was sent up on the previous Spade-Y capsule! With any luck, this should work.  You chuckle to yourself: all that is needed is a roll of duct tape to feel like the movie Apollo 13.

With the kinks of this solution hammered out as best as possible, Ground Control is urging you to perform the challenging docking maneuver as soon as possible to guide the crippled capsule to the station.  You hold the odd-looking device in your hand and think “This has never been done before”.

This part of the mission relies on making the best use of the arm. “You’ve got to get it as close as possible” your crewmate says.

Now your brow is beginning to sweat.  Everyone is counting on you and your piloting skills!  Ground Control has told you that you have just a few minutes to operate the capsule before it runs out of fuel and power!  You must guide the now safed Dragoon craft, using a video feed, a hand controller and some basic telemetry to guide you. 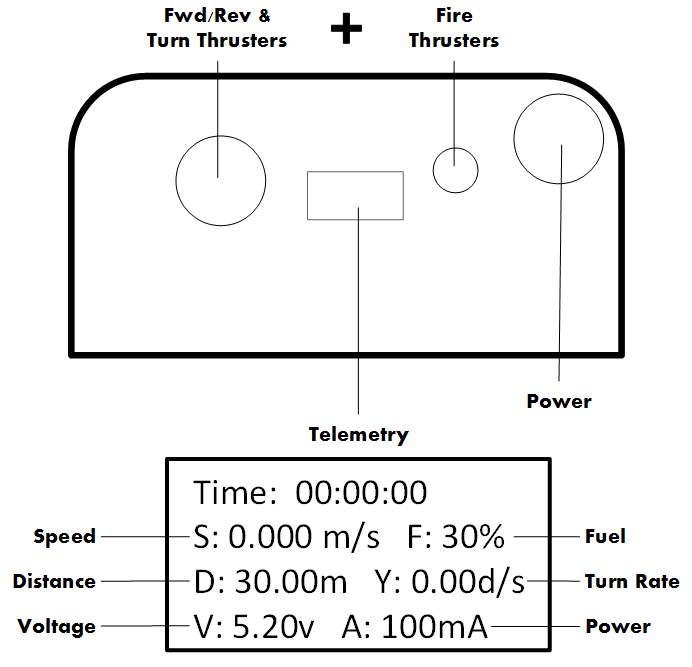 You must hawkishly monitor your fuel consumption, approach speed and voltage level.

Can you do it?